We use cookies to analyse our traffic. We also share information about your use of our site with our analytics partners who may combine it with other information that you’ve provided to them or that they’ve collected from your use of their services.
Please note! International shipments are delayed at the moment due to the current world situation (registered package inside EU: 1-4 weeks).
New arrivals Vegetables 269 Herbs 90 Edible Flowers 26 Other products 45 Cart 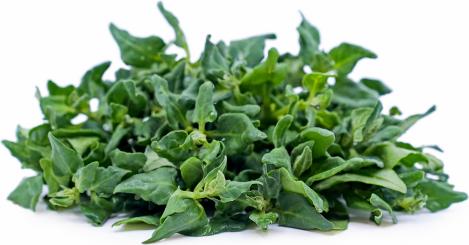 Because of the succulent-like nature of the leaves, New Zealand spinach is occasionally referred to as ‘ice plant’. Its flavor is very similar to common spinach when young, but becomes bitter and acrid when fully mature.

New Zealand spinach, botanically known as Tetragonia tetragonioides, is not a relative of common spinach as the name may suggest. Instead, it is classified in a genus all its own, and is in the Aizoaceae family, commonly named ice-plant or fig-marigold family. Also known as Maori spinach for the native people of New Zealand, this perennial plant thrives in the heat, whereas common spinach does not. For over two hundred years, Tetragonia was the only exported vegetable native to Australia or New Zealand.