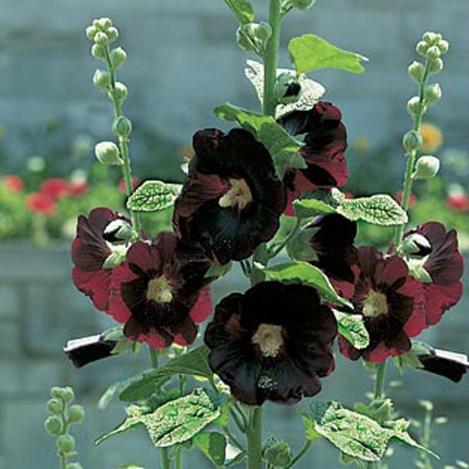 Grow in average, medium moisture, well-drained soil in full sun. Tolerates a wide range of soil conditions and some light shade, but will not tolerate wet winter soils. Considered a biennial or short-lived perennial. If grown from seed, plant seeds in August or September for bloom the following year. Although short-lived, hollyhocks easily self-seed and can establish colonies in the garden that persist for years as if they were perennials.

Alcea rosea, commonly called hollyhocks, are old garden favorites. The flowers grow on rigid, towering spikes or spires which typically reach a height of 5-8' tall and usually do not require staking. Foliage features large, heart-shaped (3, 5 or 7 lobes), rough lower leaves which become progressively smaller toward the top of the spire. Long bloom period of June to August. Sometimes listed in nursery catalogs under Althaea.

Genus name is the Latin name from the Greek word alkaia for a kind of mallow.

'Nigra' is a classic hollyhock whose deep maroon blooms look almost black. The flowers grow on rigid, towering spikes or spires which typically reach a height of 5-8' tall.

Foliage is susceptible to rust, leaf spot and anthracnose. Spider mites and Japanese beetle can also be problems. Foliage can become rather tattered and unkempt in appearance when attacked by the aforementioned insects and/or diseases, but the flowers generally are not affected. May need staking, particularly if not protected from wind.