We use cookies to analyse our traffic. We also share information about your use of our site with our analytics partners who may combine it with other information that you’ve provided to them or that they’ve collected from your use of their services.
Please note! International shipments are delayed at the moment due to the current world situation (registered package inside EU: 1-4 weeks).
New arrivals Vegetables 295 Herbs 98 Edible Flowers 36 Other products 59 Cart 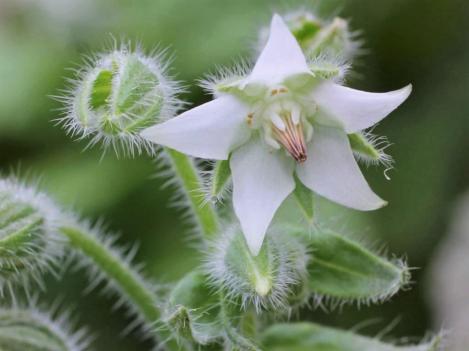 The herb borage is a well known annual with beautiful sky blue flowers and succulent foliage; not so well known and not often written about is the equally beautiful form 'alba' which boast pure white, perfectly star-shaped flowers. Each flower is centred by five black stamens which heighten the drama.

White borage is identical in growth habit to its blue counterpart, growing to a 2 to 3 foot tall bush that is slightly narrower in width. Stalks of white borage tend to be a bit sturdier, and the plant usually blooms slightly later in the season than its blue cousin. Both share the same large, fuzzy oval-shaped leaves. Their wrinkly, grey-green coloured leaves are best described by the Arabic name 'lisan atheur', which aptly describes the shape and texture of the leaf as the 'tongue of the bull.'
Borage grows well in a position with full sun and will tolerate partial shade. The plants will happily grow in just about any soil type as long as it drains well and likes to be kept somewhat moist throughout the growing season.

Borage is a very important flower for both bees and beekeepers. The flowers which grow around the stem appear from early spring right through to autumn, provide both pollen and nectar in prodigious amounts throughout the season.
Garden visitors can be converted to herbal advocates simply by offering a taste of its white flower. They are pleasantly surprised to find it has a definite but subtle cucumber aftertaste. The edible, star shaped flowers add an unusual touch to summer salads and cakes, or can be used to decorate summer drinks like Pimms and cordials.

Sowing Indoors. Sow in January to February…normally 4 to 8 weeks before planting outside.
Sow at 1.5mm (1/16in) deep in pots or trays in a good seed compost. Make sure the compost is moist but not wet and seal inside a polythene bag until germination which usually takes 5 to 21 days at 21°C (70°F).
Transplant the indoor seedlings when large enough to handle into boxes, spacing them 5cm (2in) apart. Gradually acclimatise to outdoor conditions for 10 to 15 days before planting out after all risk of frost 15cm (6in) apart in full sun and ordinary well-drained soil.
The young borage must be handled carefully; especially when it is being transplanted from one place to another as it has a very long tap root that is easily damaged.

Sowing Direct. Sow in March to April.
Prepare the area well, marking the area to be sown with sand, Sow to a depth of 3mm (1/8in). Space 10-15cm (6in) apart. Water in well. Once seeds have germinated, check and thin out if necessary, any seedlings may be transplanted. The plants will grow quite fast and are quite recognisable from weeds, continue to water throughout periods without rain.

External contact with fresh borage leaves may cause skin rashes in some sensitive persons. The prickly hairs can be irritating so you may wish to use gloves when handling the plant.

Companion Plants:
Borage is good companion plant to have in the vegetable garden as the insects it attracts make good pollinators for crops. It is a very useful companion plant to strawberries, as they are believed to stimulate each other's growth.
As a companion plant to tomatoes, it is believed that borage deters tomato worm, and is thus a natural form of pest control. Borage is attractive to blackfly, this can be used to advantage by planting it as a decoy close to one's fruits and vegetables to prevent them being blighted - an excellent companion plant for beans and peas.
Borage is also good as a green manure. Its long taproot brings up nutrients from the subsoil that remain in the leaves. Before the plant flowers the plants can be dug back into the ground to release the nutrients back into the topsoil.

Culinary Uses:
The flower, which contains the non-toxic pyrrolizidine alkaloid thesinine, has a sweet honey-like taste and as one of the few truly blue-coloured edible things, is often used to decorate desserts.
Vegetable use of borage is common in Germany, in the Spanish regions of Aragón and Navarra, in the Greek island of Crete and in the Italian northern region Liguria. Although often used in soups, one of the better known German borage recipes is the Green Sauce (Grüne Soße) made in Frankfurt. In Italian Liguria, borage is commonly used as filling of the traditional pasta ravioli and pansoti. It is used to flavour pickled gherkins in Poland.
The leaves and flowers were originally used in the manufacture of Pimms before it was replaced by mint. It is traditionally used as a garnish in the Pimms Cup cocktail, but is often replaced by cucumber if not available.

Historical Uses:
In folk tradition, borage has long been believed to dispel melancholy and ease grief and sadness.
According to Dioscorides, borage can 'cheer the heart and lift the depressed spirits', while Gerard wrote that its flowers were used in salads 'to exhilarate and make the minde glad' while cooks used them 'for the comfort of the heart, to drive away sorrow, and increase the joy of the minde'.
The Greeks and Romans believed that the herb was a source of courage and comfort, and there are references to the flowers being embroidered into medieval tapestries and the colours of jousting knights. The blooms were even floated in drinks consumed by Crusaders before battle. The American settlers carried borage seed with them on their long journeys across the Atlantic Ocean.

Medicinal Uses:
European herbalists use borage for both internal and external uses. It is used in homeopathic remedies and as a flower essence. It is a cooling, cleansing and refreshing herb with adaptogenic, demulcent, diuretic, expectorant and anti-inflammatory properties.
The starflower has been chosen as the emblem for National Cancer Day by the Cancer Research Campaign. The flower will adorn buttonholes on May 23 has been used in the worldwide treatment and research of cancer for 700 years, according to the charity. In recent years, borage has been shown to contain gamma linoleic acid (GLA), an omega-6 polyunsaturated fatty acid, which is active against various cancers, including breast, brain and prostate. It prevents the spread of malignant tumours by restricting blood vessel growth.
Borage has the most potent concentration of gamma linoleic acid found in nature, containing twice as much as is found in the evening primrose, and which is used to treat pre-menstrual syndrome (PMS). It is now possible to buy capsules of borage seed oil from health food shops for this purpose.

Home Uses:
A poultice of crushed Borage leaves is soothing and healing to skin inflammations. It will relieve insect bites and stings, reduce swelling and bruising and is also helpful for clearing up boils and rashes.
Borage tea can be made by taking a small bunch of leaves and flowers and simmering in boiling water. Steep for five minutes and strain. If mixed with honey, this can help if one is suffering from a cold. Borage tea will relieve fevers, and promote sweating. It is a beneficial treatment for dry cough, throat irritation, chest colds and bronchitis.
Borage tea is also a good remedy for such digestive disturbances as gastritis and irritable bowel syndrome. It is also said to help cure a hangover.

Origin:
Borage originated in Syria, but is naturalised throughout the Mediterranean region, as well as Asia Minor, Europe, North Africa, and South America. The flowers are usually a vivid sky blue, although an occasional pink bloom does appear, there is also a rare species with white flowers
Source: Seedaholic