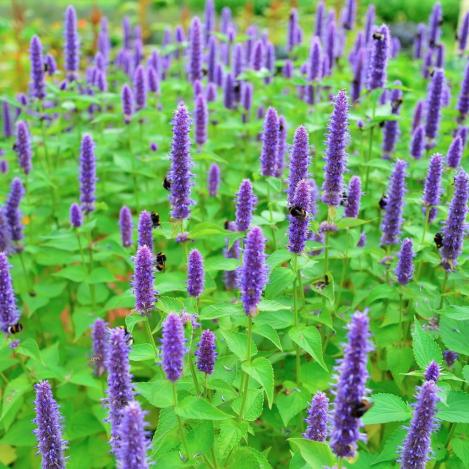 Gives a mint like flavour but with much more spice.Agastache rugosa, commonly called Korean-mint or purple giant hyssop, is an aromatic herb in the mint family.

Korean Mint is an upright, clump-forming, herbaceous perennial plant that grows about 40–100 cm (16–39 in) tall. The plant is found growing in grassy places in mountains, especially by streams, and in valleys. The plant does best in dry, well-drained soil, and prefers soil rich in organic matter, and neutral ph. Oval-cordate leaves are oppositely arranged, 5–10 cm (2–4 in) long and 3–7 cm (1 1⁄4–2 3⁄4 in) broad, with coarsely serrated margins. Some leaves have hair and/or touches of white on the underside.
Flower and fruits

Purple bilabiate flowers bloom in verticillasters that are 5–15 cm (2–6 in) long and 2 cm (3⁄4 in) broad. The calyx is 5–6 mm (0.20–0.24 in) long, with five narrow triangular lobes. Petals are 8–10 mm (0.31–0.39 in) long, lower ones longer and the ones inside serrated. The stamens are didynamous, long, and exposed. Flowering normally takes place from July to September. Fertile flowers are followed by schizocarp, with obovate elliptical mericaps of 1.8 mm (0.071 in).

Decoction of Korean Mint leaves and dried tangerine peel is taken to treat acute gastroenteritis accompanied with vomiting and diarrhea. A mixture of soapstone, agastache rugosa and clove are pounded into powdered for oral taking to treat vomiting and diarrhea due to pathogenic summer heat-damp.