We use cookies to analyse our traffic. We also share information about your use of our site with our analytics partners who may combine it with other information that you’ve provided to them or that they’ve collected from your use of their services.
Please note! International shipments are delayed at the moment due to the current world situation (registered package inside EU: 1-4 weeks).
New arrivals Vegetables 269 Herbs 90 Edible Flowers 26 Other products 46 Cart 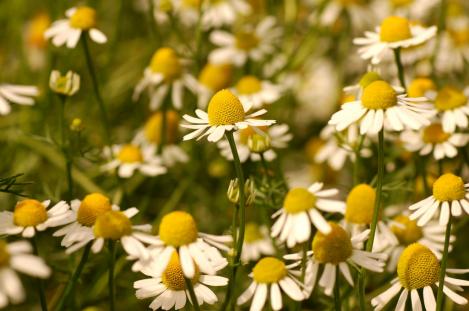 German Chamomile (Matricaria recuita) is a pleasantly sweet scented native annual herb with small, white, highly aromatic, Daisy-like flowers. These are traditional dried and have been used in numerous treatments from toothache to hemorrhoids for centuries.

Do not cover soil.

They are also used in flavouring such things as the liqueur Benedictine and for enhancing fruit flavours.  Unlike its similar (Roman) cousin this is a taller plant reaching 24-30” with fern-like light green and feathery whereas Roman chamomile has finely divided parsley-like leaves that are thicker and flatter than German chamomile. German chamomile does well in poor, clay soil whereas its close cousin, the Roman chamomile prefers well-drained and moderately fertile soil. Although both chamomiles thrive in open, sunny locations, German chamomile is best in hot, drier locations . It will also grow in lightly-shaded areas.